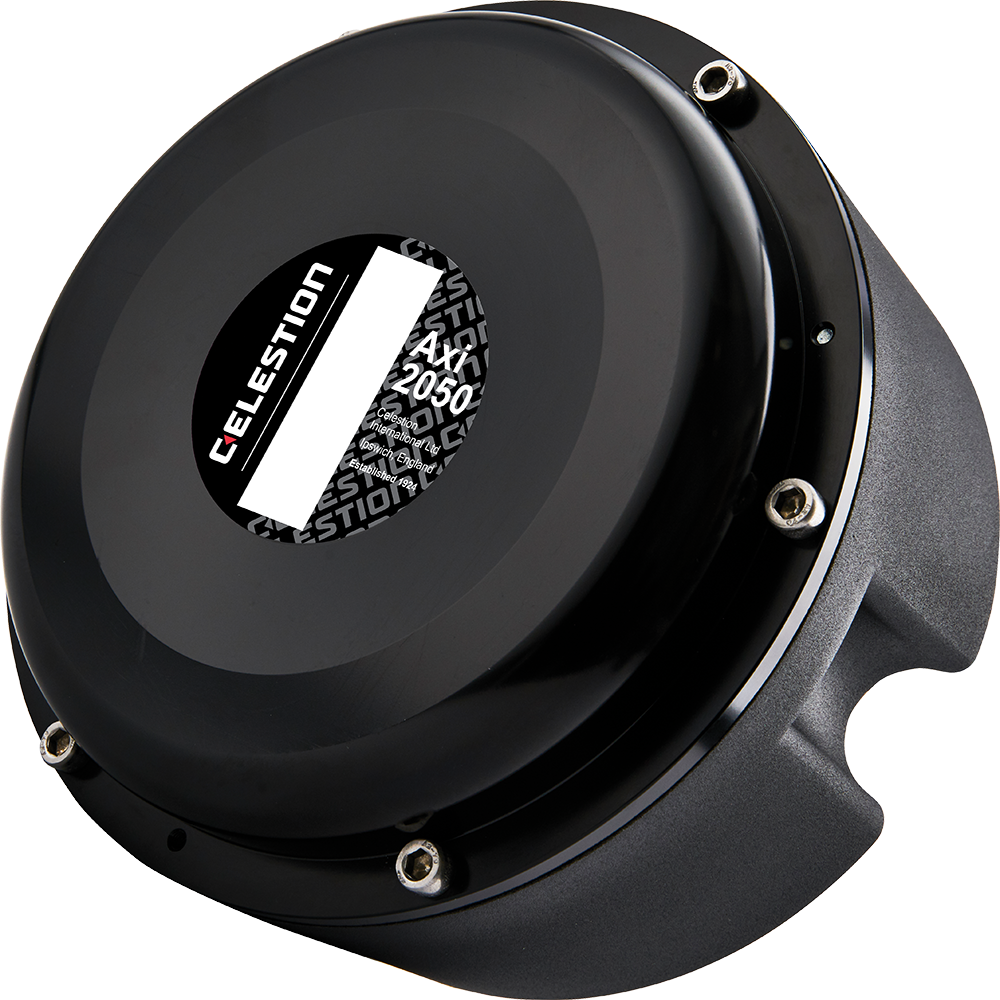 The new Axi2050 from Celestion is the latest and most sophisticated realization of Celestion’s mission to reproduce broad frequency ranges using a single driver, avoiding the sonic pitfalls inherent in crossovers. The Axi2050 applies this philosophy to the midrange and treble parts of the input signal, offering smooth reproduction of frequencies from 300Hz to 20kHz. Importantly, this eliminates having a crossover point in the middle of the human vocal band, improving the clarity and intelligibility of spoken word and sung material alike.

Most wideband drivers that deliver this kind of frequency range still employ separate diaphragms to cover lower and higher frequencies. By contrast, the Axi2050 uses a single large-diameter 175mm titanium diaphragm and 125mm aluminum voice coil. In other words, the diaphragm is large enough to produce frequencies as low as 300Hz (horn dependent), but still has a small enough moving mass for nimble high-frequency reproduction.

The diaphragm design is the product of more than five years’ research, including computer modeling of the underlying physics, which resulted in a rethinking of many assumptions about wideband performance. Notably, the diaphragm consists of many curved, axiperiodically symmetrical elements arranged in an annular (donut-shaped) configuration and clamped at both its inner and outer diameters. This adds immense strength to the very thin sheet of titanium and decouples the mechanical vibration modes of the diaphragm from its acoustic modes. Consequently, the device delivers a strikingly uncolored sound that’s both phase-coherent and free of resonance peaks across its full frequency spectrum.

Power handling of the Axi2050 is rated at 150Wrms (AES standard), and sensitivity is excellent: 140dB at 1 watt measured on a plane wave tube, with 115-120dB anticipated in real-world applications where the driver is loaded into a two-inch exit horn. The annular shape means that the entire diaphragm is effectively a surround. Since the surround area is large, compliance changes little with excursion. This allows for long excursions with no distortion and also makes possible the generation of very high SPLs, even at lower frequencies.

Primary applications for the Axi2050 include loudspeakers for larger scale fixed installations, cinema, concert and touring sound reinforcement, and mass notification systems. Celestion’s engineering team can further help you optimise your integration of the Axi2050 into your specific product platforms.

Sensitivity of up to 115dB-120dB (horn dependent) at 8 ohms nominal impedance.