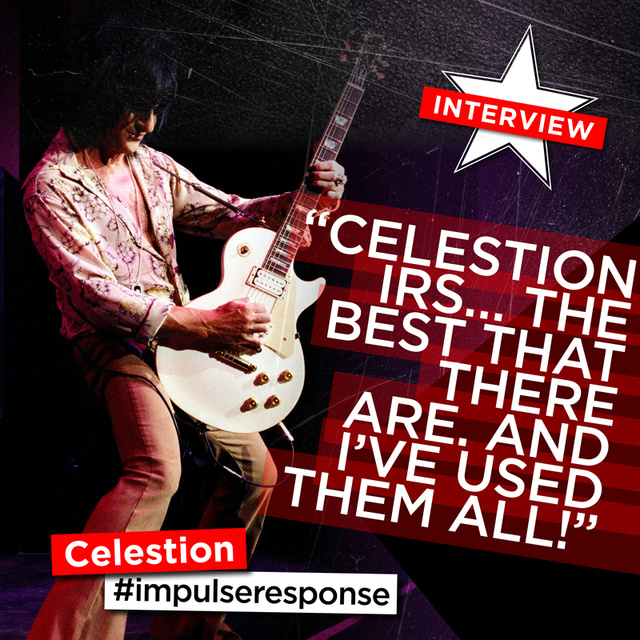 Los Angeles CA (December 1, 2017) — Precious few hard rock guitarists are more accomplished than Steve Stevens. From his prolific work with punk-crossover pioneer Billy Idol, to his lead on Harold Faltermeyer’s instrumental anthem from the blockbuster movie Top Gun, to playing on a track with legendary songwriter Joni Mitchell, his sound and style unmistakably announces itself. To achieve that sound in the studio, Stevens is a fan of using Celestion Impulse Responses, and he describes how they respond and sound great at times when you can’t necessarily mike up a vintage guitar cabinet — and often, even when you can.

“I’ve been into the idea of using impulse responses for quite some time,” Stevens explains. “I have a Kemper profiling amp at home, and a Fractal Audio Axe-FX. I’d used some IRs from other companies, but I gotta say the ones from Celestion are on a whole other level. The descriptions of them sound exactly like the speaker drivers I’m used to. The other thing is that they’re totally phase-correct. I can treat them the way I’d treat combining real guitar cabinets, bringing them up on two channels on my mixing board. They just sound great. They’re full, and the best that there are. And I’ve used them all!”

A guitarist at Stevens’ level of accomplishment has access to an enviable buffet of new and vintage amp heads and cabinets. In Stevens’ case, this even includes a Marshall 4 x 12 “with Jim Marshall’s signature in pencil on the inside.” But as he points out, the Celestion Impulse Reponses are preferable when you don’t have the option of miking up a cabinet — and often, even when you do:

“My home studio is basically my living room,” he says. “I used to go through the trouble of miking a cabinet in another bedroom or whatever. But sometimes I’ll need to come back to a track and redo something, and it’s this whole pain in the butt to try to replicate the exact mic placement and all that. So now I’m using the Celestion IRs exclusively. It’s easy to know the exact one I used on the track. I am committing it all to hard disk, though … I’m a little bit old-school, so I do commit to the sound I’m tracking with.”

Since the Celestion Impulse Responses come in the form of WAV files, they can be used in a wide variety of host platforms that know how to interpret them: convolution plug-ins on the software side and modeling amps when it comes to hardware. Stevens prefers hardware, and further explains his IR recording process: “At home I have another unit [modeling amp] called the Two Notes Torpedo. I’ll audition the IRs using the Kemper without any cabinet, through Logic Pro. Then I’ll load in the Torpedo Remote, which comes up as an AU plug-in within Logic. Then I’ll audition all of the IRs on my computer. The ones I really like, I’ll ending up porting over to the Torpedo, so they’re living right in hardware. That way I can use them without firing up the computer.”

Does Stevens have a favorite Celestion IR? “I have the complete library,” he laughs, “I like the Creamback. I don’t have an actual guitar cabinet with those in it, but for some reason, the IR of that particular speaker is something I’ve started to favor a lot. It used to be the Vintage 30 because I knew the real speaker so well. But the Creamback really surprised me. I’d say, if someone hasn’t used IRs for guitar before and wants to get their feet wet, jump in with that speaker and see what you get.”

“Celestion has been very good to me in general, not just with their Impulse Responses,” Stevens adds, ” When I blow out a speaker touring in Europe or somewhere, they’ve always been quick to get a new one out to me. Having that kind of support from the company has just been great.”

Read the full interview with Steve Stevens here and view the complete range of Celestion Impulse Responses available at Celestion Plus, including the A-Type, Neo Creamback,  G12-H150 Redback,  G12M Greenback, G12M-65 Creamback, G12M-75 Creamback, G12H Anniversary, G12-65,  Celestion Blue and Vintage 30 models mounted in 1×12 and 2×12 open and closed back and 4×12 cabinets (5 varieties of each.) All the Celestion IRs are available for download both as an individual single cabinet-type IR as well as a full collection.