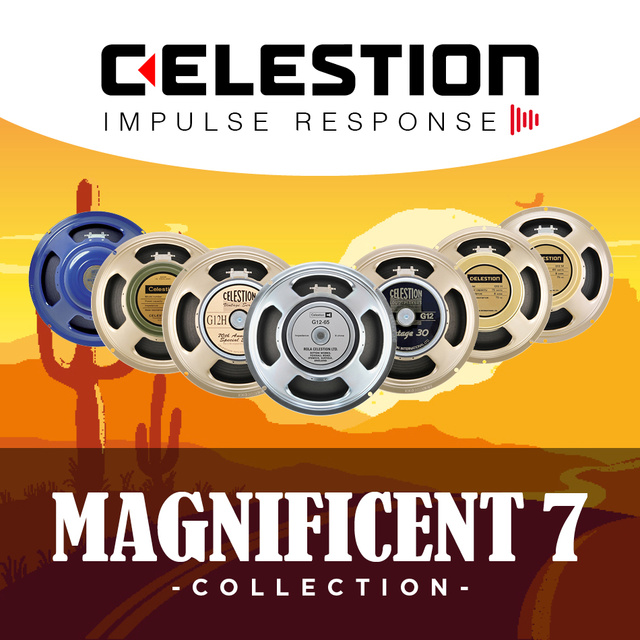 Ipswich, UK (May 19, 2020) —Celestion, the premier manufacturer of guitar and bass loudspeakers and professional audio drivers for sound reinforcement applications, is very pleased to debut a new special collection of Impulse Responses – the Magnificent Seven – which includes the tones of seven of the company’s legendary speakers available for digital download. The new Magnificent 7 Collection features a line-up of seven iconic 12-inch speaker impulse responses, including the Celestion Blue, G12M Greenback, Vintage 30, G12M-65 Creamback, G12H-75 Creamback, G12H Anniversary and Heritage Series G12-65. The new Magnificent Seven IRs, along with the other classic collections of genuine Celestion speaker IRs, are available for audition and download at CelestionPlus.com.

The Magnificent 7 Collection represents the first of Celestion’s most popular guitar speakers to be made available as impulse responses, offered as a complete package to provide a wealth of essential tones in one collection.

The Magnificent 7 Collection offers users a unique opportunity to get all these incredible tones at a discount of more than 40% off compared to buying each of the seven speakers individually. And users who already own one or more speaker IR collections featured in the Magnificent 7 will automatically get a further 10% discount.

About Celestion Impulse Responses
Celestion IRs, which capture the essential behavior of the cabinet in the specific space in which it was recorded, including the frequency and phase response of single drivers as well as the interaction of multiple speakers, offer the user significant benefits. In both recording and live production, Celestion IRs enable the desired tone to be precisely and consistently reproduced regardless of the music recording or live sound environment. And IR users can escape the limitations of a single mic and cabinet setup and explore a universe of possibilities to create the perfect tone. Once you find a tone that you love, it can be precisely recreated, in the studio or on the road, time after time. And the IRs allow Celestion customers to audition specific models before purchasing one or more physical speakers.

Celestion IR digital downloads are available in uncompressed, industry standard .WAV format at 44.1 kHz, 48 kHz, 88.2 kHz and 96 kHz sample rates at 24 bit depth, in lengths of 200 and 500 milliseconds Once the files are downloaded and unzipped, users simply load the IRs into a convolution plug-in in their DAW or into other processing hardware. These formats will work in all known hardware capable of loading IRs, and for the most popular hardware Celestion have already grouped together the correct formats. Guitar processor manufacturers supported include Atomic Amps, Fractal Audio Systems, Kemper, Line 6, Logidy, Positive Grid, Two Notes, Headrush and Yamaha. The Celestion IR files may be downloaded in the sample rate and length appropriate for the hardware being used or as a complete package of all rates and lengths. Certain third party hardware requires the files to be converted into a proprietary format before use.
Celestion Plus.

About Celestion and Celestion Guitar Speakers
An important element to essential British guitar tone since the birth of Rock & Roll, Celestion Guitar Speakers are famous for their lively and vocal midrange character with plenty of sparkle and chime. With worldwide headquarters in Ipswich, England, Celestion design, develop and manufacture premium guitar and bass loudspeakers, and high-quality professional audio drivers for sound reinforcement. These world-renowned speakers are used onstage and in clubs, theatres and other venues the world over. Contact Celestion at: info@celestion.com and visit us on Facebook at www.facebook.com/celestion.
www.celestion.com