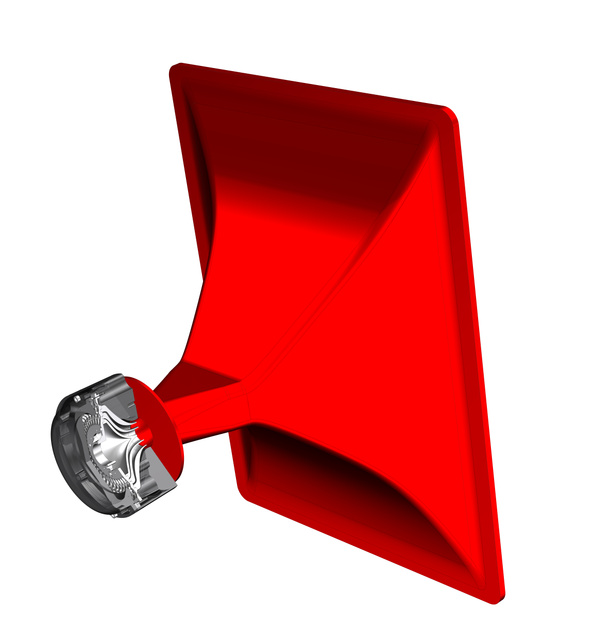 Frankfurt, Germany (April 2, 2019) —Celestion, the premier manufacturer of professional audio drivers for sound reinforcement applications, is pleased to announce that their uniquely designed  “Big Red Horn” will be on display with the Axi2050 wideband axiperiodic compression driver at the company’s stand at the 2019 Pro Light +Sound show (Hall 8.0, Stand, G81.)

Celestion engineers have created a bespoke horn specifically designed to work with and optimise the wide bandwidth performance of the Axi2050. The horn that appears at this year’s show has been constructed using a distinctive fibreglass compound in Celestion red (other colours are available!) — features a 2-inch throat exit with a 90×45 degree radiation pattern and 400Hz cut-off frequency.

“Celestion are displaying our “Big Red Horn” with the Axi2050 at our stand at Pro Light + Sound, as testament to our horn design capabilities,” explains Managing Director Nigel Wood. “Having personnel experienced in horn design on our team, and developing software to augment this capability still further; we have the know-how to offer in-depth technical support for horn and waveguide design to our OEM partners.”

Performing the role of two speakers in one, the Axi2050 is a high power, high-output driver which reproduces a maximum frequency range of 300Hz-20,000Hz without the need for a midband crossover. The Axi2050 delivers an exceptionally coherent signal, particularly in the critical listening band and an extended frequency range; enhancing clarity and speech intelligibility, as well as reproducing music more dynamically and with greater coherence. In contrast to most existing high-sensitivity, wideband drivers which are designed with two separate diaphragms, the Axi2050 uses a single, large diameter, sculpted, circumferentially axiperiodic, annular titanium diaphragm. This breakthrough technology enables the device’s remarkable wideband output, as well as providing a number of other significant advantages.