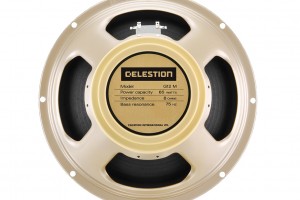 The G12M, also known as the Greenback, is perhaps the definitive vintage Celestion ceramic magnet guitar speaker. Developed in the mid-sixties, it was quickly adopted by players like Hendrix, Clapton, Beck and Page, who typified the louder and more aggressive blues rock playing styles that came to characterize that era.

The new G12M-65 Creamback produces that familiar, woody G12M tone, but handles greater power making it ideally suited for today’s amps, when a vintage tone is desired. The increased power handling brings with it low end grunt that